Violet Malice has been polishing off a wheel of cheese under the sheets with the help of a torch and a cordless vacuum. This week she has a curveball for you: surrealism + discussions about sexual intercourse. She has been quaking with laughter: throwing her head back all of a sudden in the midst of audible contractions of the diaphragm. Dedicated to finding a bedtime read that kisses the eyelids and holds on tight. Violet’s weekly adult book review attempts to answer that million-dollar question: can a good book ever be as unnerving as a good fuck? 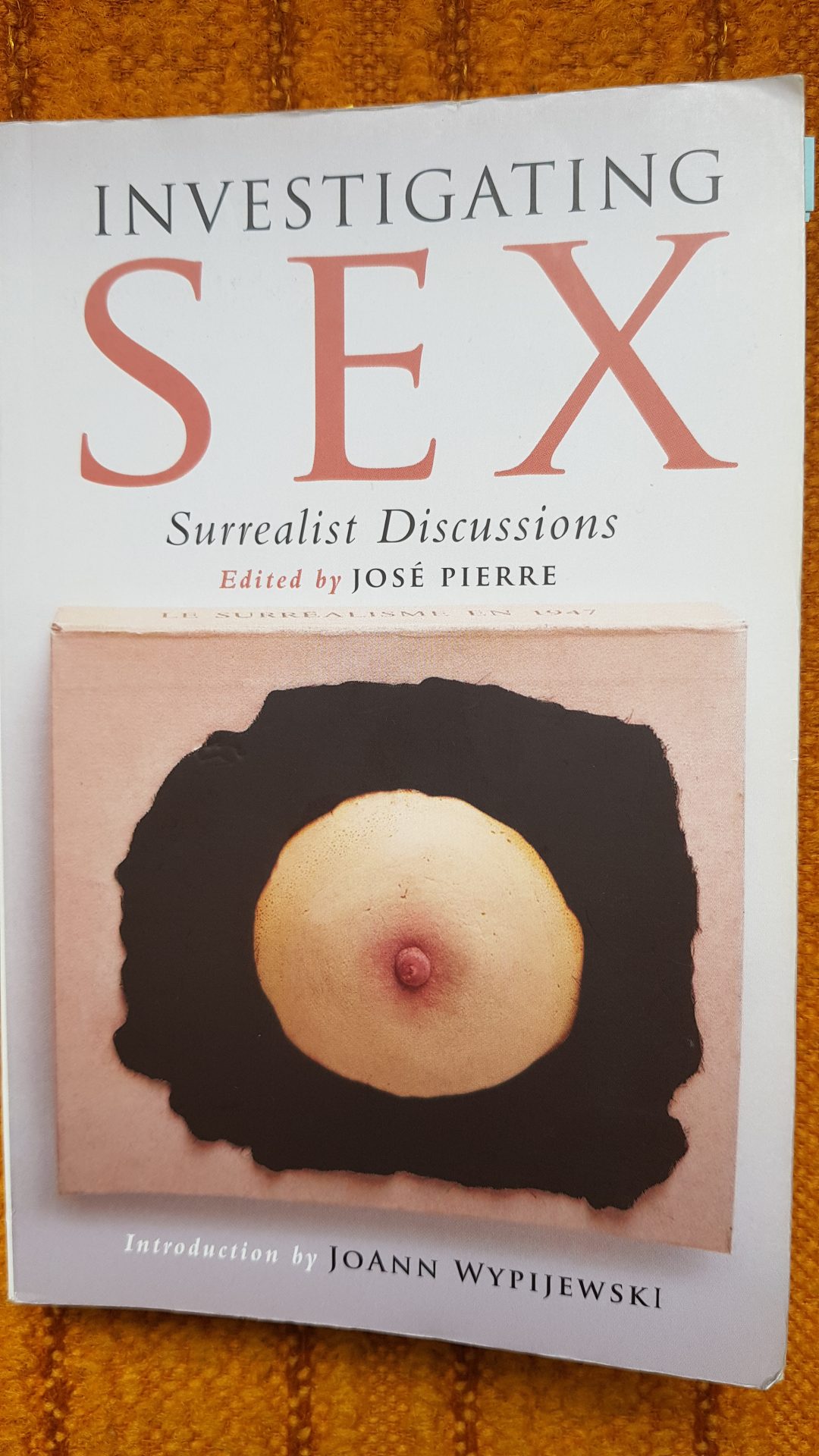 You find all the women you have had sexual relations assembled together, in a cafe for example, with the one you loved or believe to love standing apart. What do you do?

To what extent is the man aware of the woman’s orgasm?

When you make love, do you require certain specific external conditions to be fulfilled? Which ones?

What is your favourite age for a woman?

To what extent and how often can a man and a woman making love reach orgasm simultaneously?

Do you attach more importance to the man’s orgasm than the woman’s?

Would anyone allow themselves to be seen by a woman with suspicious stains on their trousers?

You have not made love for some time. How many times can you do it in one night (from nine in the evening to nine in the morning) and on each of the three following days? What is the maximum you’ve managed in twelve hours?

Apart from ejaculating in the vagina, mouth or anus, where do you like to ejaculate, in order of preference?

Have you never been attracted to any other animals?

Do you know where the clitoris is?

Since men have a cock between two balls, how is it that women have nothing between their breasts?

JEAN BALDENSPERGER: You say that if a woman is dirty it doesn’t stop you feeling attracted to her. But I think that cleanliness is one of the basic requirements.
[…]
ANDRE BRETON: Naturally. But still it doesn’t seem to me impossible to love a woman who is dirty and stays dirty, since love has nothing to do with such material considerations. Stupidity in a woman, on the other hand, seems to me to be an intolerable defect. All that I wish is to love a woman enough to love her whether she’s clean or dirty.
[…]
JEAN BALDENSPERGER: Yes, but when you speak of love you are also thinking of going to bed with her. Would you agree to go to bed with a woman who was in a disgusting state?
ANDRE BRETON: Definitely.
JEAN BALDENSPERGER: I would not be able to make love with a woman whose arse was encrusted with shit.
ANDRE BRETON: That’s your affair. There are people who like that very much […]. I consider that Baldensperger is talking like a child. I don’t see any difference between the encrusted shit of a woman one loves and her eyes. […]

JACQUES PREVERT: What do you think of a woman with a shaved sex?
ANDRE BRETON: Very beautiful, infinitely better. I have never seen it, but it must be magnificent.

MAX ERNST: Not long ago I ejaculated in circumstances entirely contrary to my sexual constitution, physiologically and psychologically. In a dream I was buggering a man, and I awoke just at the point of greatest pleasure. As my excitement grew, I pictured all the complexes that might arise from the fact of coming through buggering a fully-clothed man sitting on my knee – as a matter of fact it was a very specific gentleman, whom I don’t wish to name. I continued, awake, until I ejaculated. This is a man who, in waking life, disgusts me physically, morally, and from every other point of view.

ANDRE BRETON: Would you make love to a woman who had a period?
PIERRE NAVILLE: I’m not answering that.
PIERRE UNIK: Tanguy?
YVES TANGUY: I find it very pleasant.
ANDRE BRETON: Why?
YVES TANGUY: A matter of colour and smell.
ANDRE BRETON: Duhamel?
MARCEL DUHAMEL: I don’t like it because of the sanitary towels and all that.
ANDRE BRETON: Why do you dislike them so much?
MARCEL DUHAMEL: Because of the hospital associations – blood-stained towels and so on. Not that it always stops me making love with a woman.
ANDRE BRETON: Genbach?
JEAN GENBACH: A thing which vexes me is the fact that women urinate and defecate like men. I didn’t know until two years ago that women had periods. And then it disgusted me. I felt I’d been tricked.
ANDRE BRETON: But now that you know?
JEAN GENBACH: I don’t believe that a woman I love can have periods.

ANDRE BRETON: What do you think of pregnant women?
MARCEL DUHAMEL: Absolutely disgusting.
YVES TANGUY: I immediately think of Caesarian sections.
PIERRE UNIK: I don’t like it at all.
[…]
JACQUES PREVERT: It’s comical if she’s ugly, but it’s sad if she’s beautiful.

ANDRE BRETON: And what of the possibility of a man and a woman having simultaneous orgasms?
JEAN GENBACH: Until now I have always thought that when I embrace a woman she reaches orgasm when I want her to.

JACQUES PREVERT: My earliest sexual memories concern children of my own age who were interest in nothing but their sexual organs. I was the same age. At the age of seven I was shocked by a little girl, the sister of one of my friends, who had fallen over backwards. I could see that she didn’t have a sex like me. I concluded that she was disabled. I could no longer bear to see her. She disgusted me. Later she went blind.

Overall sexual content: I don’t want to have it off with any of these people. And I did before reading this book. I am a super fan of some of the surrealist massive: Max Ernst, Man Ray, Yves Tanguy, Paul Eluard, Benjamin Péret, and Raymond Queneau, to name but a few. It’s common knowledge that the surrealists were misogynistic cunts who objectified and suffocated women (metaphorically speaking – in the sense that they held back and/or diminished the extremely talented female artists of the time, who they were usually fucking), but I suppose I hadn’t fully appreciated the depth and breadth of their big dick problems. They are all complete fucking a-holes – with one or two exceptions (Louis Aragon is about the only one that I would give head to now, so I should probably review his short erotic novel Irene’s Cunt next week).

The book is jammed full of misogyny, homophobia, racism, peacocking (Paul Eluard insists he’s had sex with between 500 and 1,000 women, which might be true, except that the estimate is so wide, you fucking knob jockey) and shameful ignorance. André Breton threatens to leave at one point if several of the participants don’t stop trying to “promote” homosexuality. The surrealists were hoping to instigate honest and open discussions about sex, but seem totally blind to the possibility that belittling each other about their responses might be counter productive and that talking about sex might be quite a delicate and difficult thing to do. When asked what it means to love a woman, they are all flummoxed. I can’t possibly give a definition like that “at the drop of a hat”, says Benjamin Péret. It seems that these GREAT WHITE MALE writers are not so good with words after all.

Titillation station: Although strictly not erotica, it did have one or two moments. Some passages of description that appeared starkly honest and that focused on sexual responses did lick the soaking wick down the mine shaft.

Food for thought: Most of the participants hail love as the greatest thing life has to offer and go on and on about only ever having sex with women that they are in love with. It is a very romantic ideal and seems to fit with the surrealist preoccupation with the unconscious and the dream state. Obviously, women are part of that fantasy – what with not being allowed to have periods and that, and magically having an orgasm whenever the man wishes it so. It’s a shame that the aim to revolutionise the human experience and harness the power of the uncanny did not seep into the bedroom and entice the backward looking arseholes of these great artists to relax just a bit.

I just have to give the last word to MR BRETON: I attributed my impotence to the mauve wallpaper in the room – I’ve always found the colour mauve particularly unbearable.