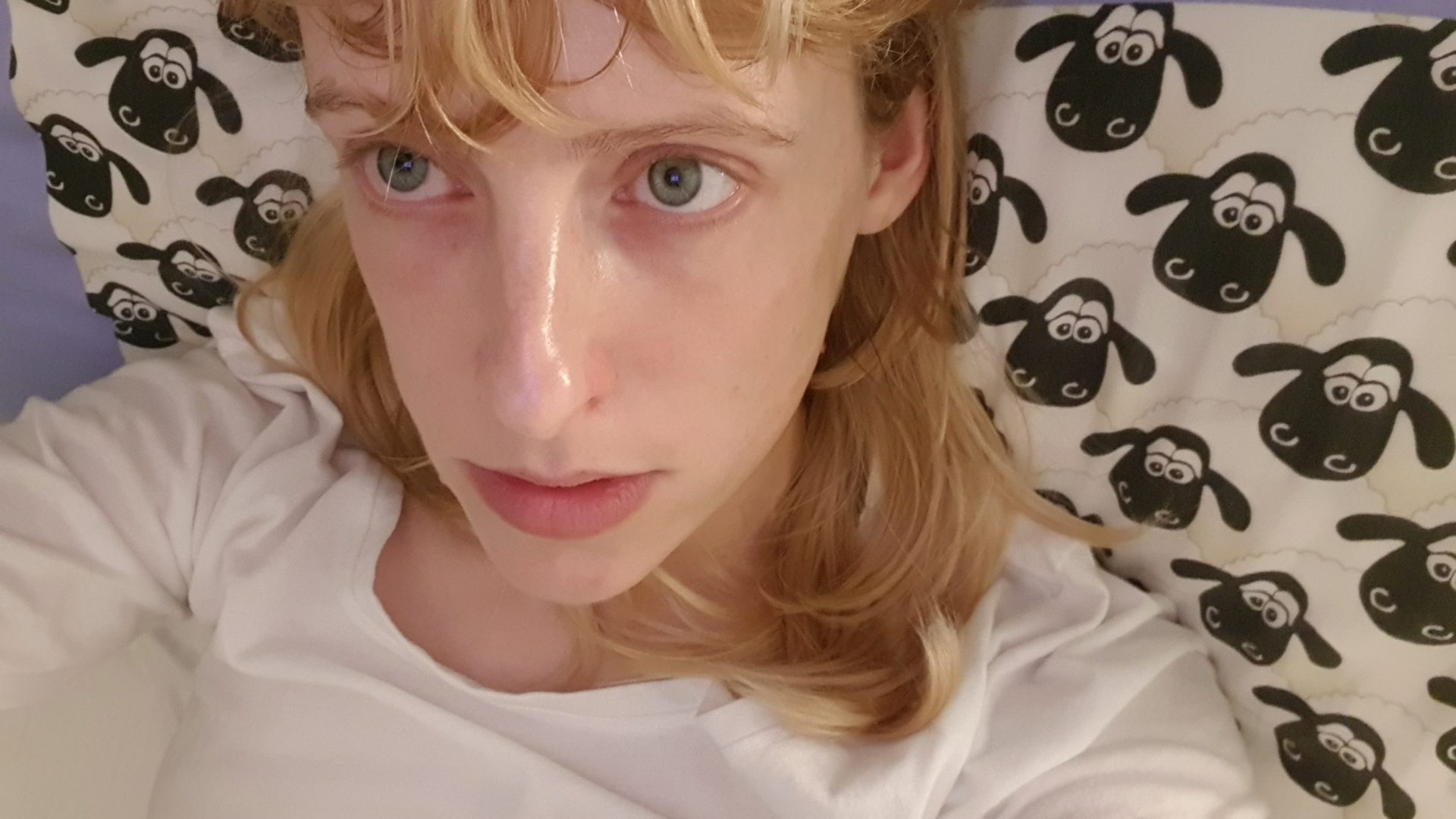 Violet Malice has been preoccupied with painted ladies and crotch flies this week. Wondering why buttons are sometimes used instead of zips. Is it a class thing? Does the skin get between the teeth? So, you’re down there, wahey, and you suddenly feel some really hard buttons when you weren’t expecting them to be there, and you’ve got to style it out. It’s hard to undo buttons with your teeth, right? Violet has been out of touch recently. Squirreled away in the South looking like Mona Lisa during a hurried 69. She has been wide awake staring at her mons veneris and trying to complete it. This week’s pulp paperback is a pocket rocket of a read. All skirt and no knickers. A book with a mission to make us all a little bit more dilated. Violet’s weekly adult book review – without frills – attempts to answer that disarming question: can a good book ever be as mouthy and uneducated as a good fuck? 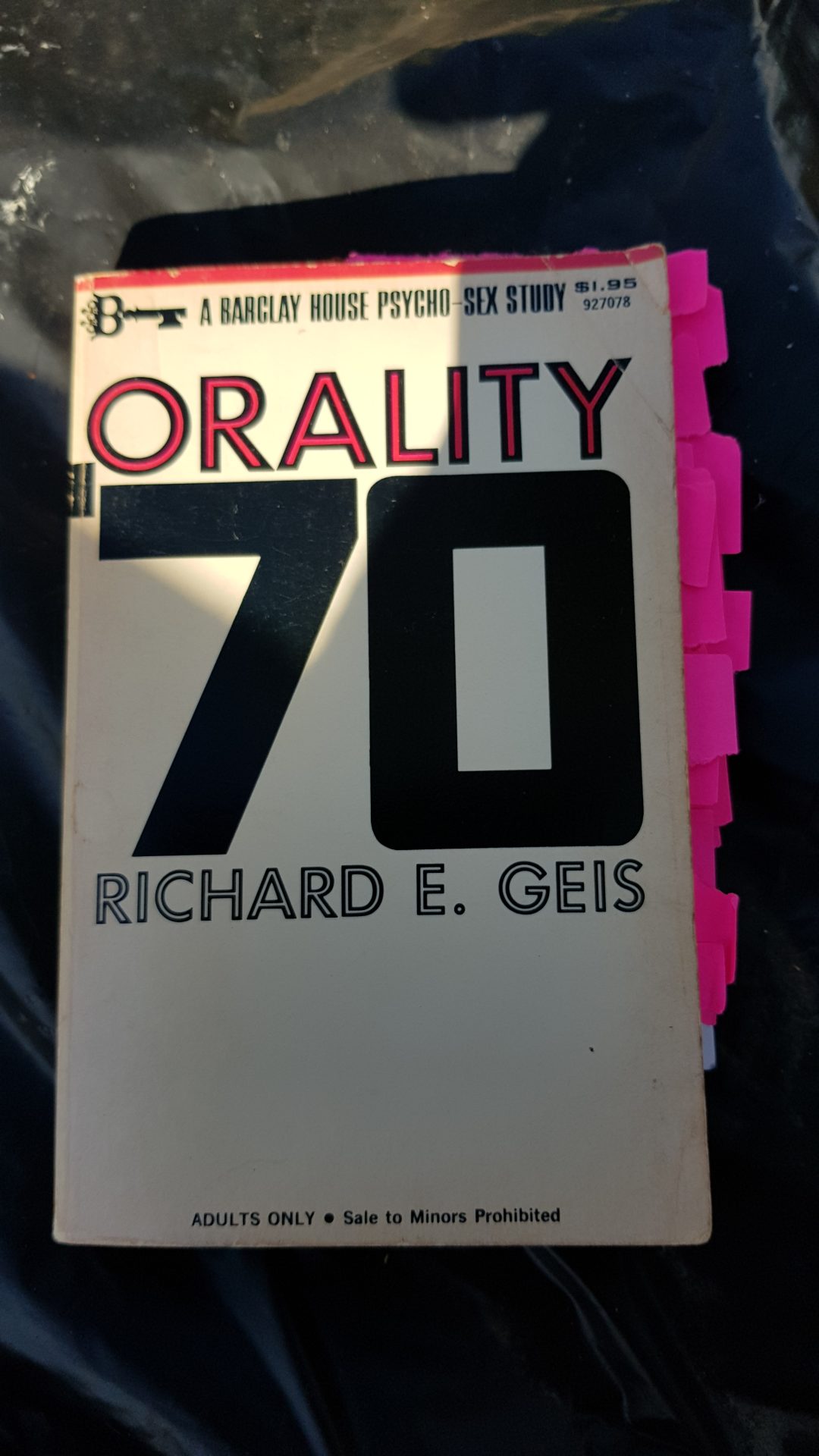 Quick synopsis: The book is made up of a series of interviews with supposedly real people about their sex lives and experiences, with a particular focus on oral sex: the mouth. The book is described on the cover as a psycho-sex study and is very reminiscent of Eve Ensler’s The Vagina Monologues in its honesty, however there is one big difference in that the author does enter (literally) some of the stories. It is because of this and the author’s notoriety as a cult writer that I suspect that this is a work of fiction posing as non-fiction. I Googled it and nothing on the book is out there, not even a spunky review or synopsis. All I know for sure is that this book is a follow-up to Geis’ other book Orality ’69, written the year prior, and which also presents supposed first-hand experiences of sex. I have not been able to get hold of a second- or even third-hand copy of Orality ’69, so we will have to make do with the sequel on its own (ideally, I would have reviewed both books together, like the overbearing CEfuckingO that I am).

Title: Does what it says on the tin. The book came out in 1970 and was a follow-up to Orality ’69 so I presume ’70 refers to the year. Orality is a good word for the job, as it means both the act of verbally communicating (so the interview style of content) and the act of focusing one’s sexual energy on the mouth. So, open wide and swallow it.

Cover image: N/A. Obviously, scientific books need to look serious. It goes without saying that you can’t whack a big cock on the front of some journal about the metabolic system, it’s just not on. The warning: ADULTS ONLY, is a nice touch. Makes me want to read it. Like when I’m tempted to drink apricot shampoo because it says not for human consumption. Puts the idea straight into my silly little head.

My wife is a cocksucker!

Her boss commented, “She’s built like the old brick shithouse.”

I could see the wet pink peanut that was her clitoris between folds of parted flesh.

Donny and Sammy blew dried peas at her cunt with plastic straws.

He fumbled her blouse open, got her bra off and “went sort of ape”.

While she licked Sammy’s prick clean of her husband’s shit, Donny stuck a finger in her ass, pulled it out and made her lick that clean, too.

“With ass it’s mostly tight right at the opening, that’s where you get the feeling from, except if the girl has a load of shit – if she has to take a crap when you plug in – then you get an extra feeling.”

Overall sexual content: An incredible book. It’s a riot of heady but poignant sex like those trashy magazines that suck you in with outrageous headlines. The mix of people featured is spot on: the boss and his secretary who is also his sex slave; the alcoholic nympho who has never had an orgasm (which feels like it should be an oxymoron to me); the guy who got half his cock shot off and as such has rerouted his pleasure so successfully that he is an undisputed Olympian of eating pussy; a lesbian couple who are obsessed with 69; a senior hetero couple who manage to overcome their sheepishness and go down on each other for the first time after decades of marriage; and the woman hater who is exploding with bile and projected guilt.

The personal accounts – which could be true – are really touching as well as incredibly erotic. They cover current sexual preferences as well as the person’s sexual history. Any sort of psychoanalysis feels like a bit of a stretch – especially as in a few instances the author ends up being sucked off by the person he is interviewing, which makes a mockery of any sort of authority. But still, I think there is value in trying to understand where inhibitions or preferences might come from, and through sharing personal experiences understand our shared humanity and that we are not alone in our desires.

Geis is pushing for a more liberal and tolerant society. He is sex positive and calls out the laws in the United States at that time, the government bodies and the church groups that stood in the way of sexual self-expression and freedom. He tells people to think about it. To decide for themselves whether the people presented in this book should be punished (legally and therefore not for pleasure) for their behaviour.

Titillation station: Hot as a chip pan fire in Tenerife. Shortness of breath. Fireworks with loud bangs. Animated before quickly becoming irrational. This is a keeper. To be placed in an accessible position on the under the bed bookshelf right next to the trunk of sex toys.

Food for thought: Everyone always thinks it’s about sticking it in. Penetration this, penetration that, but in truth it’s not about that stuff at all. Sexy sex and intimacy and pleasure are so much more than nuts and bolts.  It is refreshing to read a good book arguing the corner for something different. For something exposing, gloriously open, and generous. To be the giver of pleasure and to receive pleasure from giving is a beautiful thing.

I particularly like the bit where the married couple in their 50s decide one evening out-of-the-blue (pun intended) to have oral sex for the first time. He says to her: “I’m going to eat you tonight,” and she replies delightfully “It’s about time.” The detailed description of them giving each other head is exquisite, especially when he locates her clit and gets turned on by her thrashing about in the pillows. She then returns the favour and manages to stop herself from vomiting all over his stomach. Now that’s true love, surely.